What are the connections between variables and constraints and limitations within a system? Every wave is different yet similar in form. I cannot tell it to move in a different way that is outside of its universal design. Its form is a design of it’s functions. The water flows over, under, and through the rocks and the trees. It moves and shifts in unpredictable ways with an intent to constantly change within the boundaries of its functions.

I wonder about approximation. How can a circle ever be measured if pi, the tool for measuring it, is itself infinite? And what makes a fraction repeat and never reach completion? I think about things breaking into smaller things like matter decaying into molecules and particles. I think about numbers and count, and wonder about time as a collection of loops within one big development-like waves in an ocean.

Could it be that .999… is not equal to 1 as 1 is a constant, an absolute, and without any change, while .999… is an asymptote, always in a state of flux, growing, recurring, endlessly wanting to be complete.

As nature unravels its composition of rhythms and patterns, as days and nights, the changing seasons, the cycles of the moon, each a process within itself, every aspect of it works together towards a larger totality.

As we try to understand its complexity, through replicating the rhythms and patterns that we experience in it, we realize that we are part of the accumulative process. We are performers in the orchestra of nature, amongst all the other forces. Through this collaboration we start to become something much bigger, much grander, and we begin to learn the potential of our own existence. As we grow towards a more expanding sense of self, we remain just a fraction of the whole that we have yet to become. (View Project Site)

The pile of rocks eventually falls but in unpredictable ways. 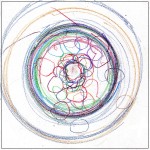 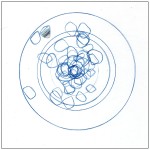 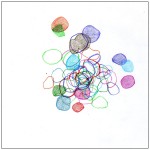 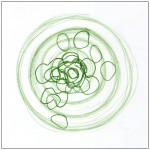 For there is order and there are limitations to an endless development of an otherwise seemingly uncontrolled, undetermined, and chaotic system we refer to as life.

Life seems to emerge out of paradox and it flourishes in contradiction. It is the relationship of differences and commonalities, variables and constraints. And it appears to exist in the gradient between the stark blacks and whites. Life may be a circle; infinite and incomplete, existing in spaces; squares and rectangles, rooms, and cities.

Sometimes when I go to the river I stack rocks on top of each other and watch them fall in different ways. I stack the rocks in the same fashion, but they always fall and land in different spaces, in various ways. Sometimes the rocks fall and land close together and they also fall far apart. Although the process is simple, repeating it uncovers a transformable, varying, complexity and despite precision or measurements the rocks always land in predictable patterns. I measure every fall with marks, building a map over time, a record, a history of the process, like the bottom of my feet changing with every fall they catch in each step of a walk and like the circles on my fingertips changing for years with every touch. (View Project Site)

“Nature likes simplicity. But the contradictory structure of balance – the simultaneous coexistence of harmony and opposition – means that it is anything but simplistic.

Our understanding of the universe is based upon two different theories. On the one hand we have Einstein’s general relativity theory, which explains to us the large-scale universe of planets and galaxies. On the other hand we have a completely different set of rules, quantum mechanics, which tells us about the small-scale, subatomic universe. Whereas general relativity theory presents us with a rational model of space and time in which things behave harmoniously, the rules that govern quantum mechanics are contradictory.

Which brings me back to watching the waves on the beach. As I stand barefoot there, I can feel the sand beneath my feet. Each of these grains of sand contains a world of paradox. Physicists have discovered that under certain experimental conditions, subatomic matter may be seen either as particle (which is confined to a very small volume) or wave (which is spread out over a large area). Some observers may see matter in particle form, whereas others will see it as a wave. Neither of these descriptions gives a full picture of reality; both need to be taken into account, simultaneously, if we wish to understand the true nature of subatomic matter. Often it is believed by scientists that a paradox is merely someone misinterpreting what they are seeing, but quantum physics demonstrates that paradoxes are a key feature of the world. Reality, at its deepest level, is more paradoxical than science ever thought possible.”

“There is no doubt that the polar-cycle is a highly significant process which finds expression in a wide variety of different fields, yet it is a function which we ignore. Polarity is life’s hidden controller. The logic behind this is entirely sound. All movement is caused by polarity: as soon as a state of equilibrium is achieved, movement stops. Even where we see random behaviour, there is order beneath the surface. In a stormy sea, every reaction has a preceding action, and each current is met by a countercurrent. Complex effects arise out of a multitude of conflicting forces, but every constituent element in the process balances perfectly.” (The Paradox Principle)